The EIC GHG programme, open to all EIC beneficiaries, aims to support innovators in reducing their greenhouse emissions, through a dedicated GHG tool as well as co-creation sessions and working groups with European corporates, regions and industrial associations. Yousef Yousef, EIC Advisory Board member and he himself an entrepreneur got together with us to discuss the programme and his views on greenhouse gas reduction.

We officially launched the EIC GHG programme. Can you describe what the programme entails and how it fits with the goals and the spirit of the EIC?

Europe is moving towards a green transition, which means there is a lot of new tech being developed, there is a lot of research done in this field, and also regulations are changing. Just today (Wednesday, 21 April) the EU Climate Law, which ties into the goals set out in the European Green Deal, was adopted by the European Commission. It states that at least 55%, of greenhouse gas emissions need to be reduced by 2030. There is a real movement Europe-wide, so also within the EIC, to support companies to reduce their own greenhouse gas emissions. So, all in all it’s a perfect day to launch this programme.

What are we going to do for the EIC innovators? On the one hand, there is knowledge transfer, to educate them and to help them with tools and experts to reduce their emissions. On the other hand, the co-creation with corporates, industrial associations and regions to develop new innovative product and services. So, what we see is if there are two companies with two different technologies or two different products, once they meet, and they talk about their own solutions, they will come up with something which will be better than doing it on their own. This combination between tools, networking, and co-creation is what makes EIC GHG unique.

The online chat was on fire, with already many discussions between beneficiaries, people networking and linking up. Perhaps already a preview of what to expect of the programme?

Definitely! I always say you need four people in the room to create an action: you have the innovator, the investor, the corporate, which can scale it and apply it, and the government, which can support with regulations and funds. Put all these people with the same focus in the same room and something is very likely to happen. And that is exactly what we aim for with EIC GHG.

At today’s event, you spoke in your capacity as EIC Advisory Board member, but as we know you're also an entrepreneur yourself. Can you tell me a little bit about your own involvement and experience in reducing greenhouse gas emissions creating green innovations, e.g. with your involvement in Green Ups (a network of green entrepreneurs in the Netherlands)?

I am indeed an entrepreneur myself. I founded LG Sonic about 10 years back. There we design and manufacture innovative solutions to control algae blooms and improve water qualities. What was important to me, straight from the start, was to develop a product which is future proof, with little to no greenhouse gas emissions.

One of the things that really helped us to grow was using a large corporate as a reference to conduct pilots. So first, we get the funding from Europe to do the innovation, we implemented our innovation and then we needed to prove we can do it on a larger scale. And that’s where the corporate came in. They took our products, tested it for a year, gave us a reference and allowed us to scale. The feedback you receive from a corporate is crucial. On the other hand, they can also help you in promoting your innovation. That’s why connecting and networking with large corporates is such an important part of the ‘EIC-package.’ 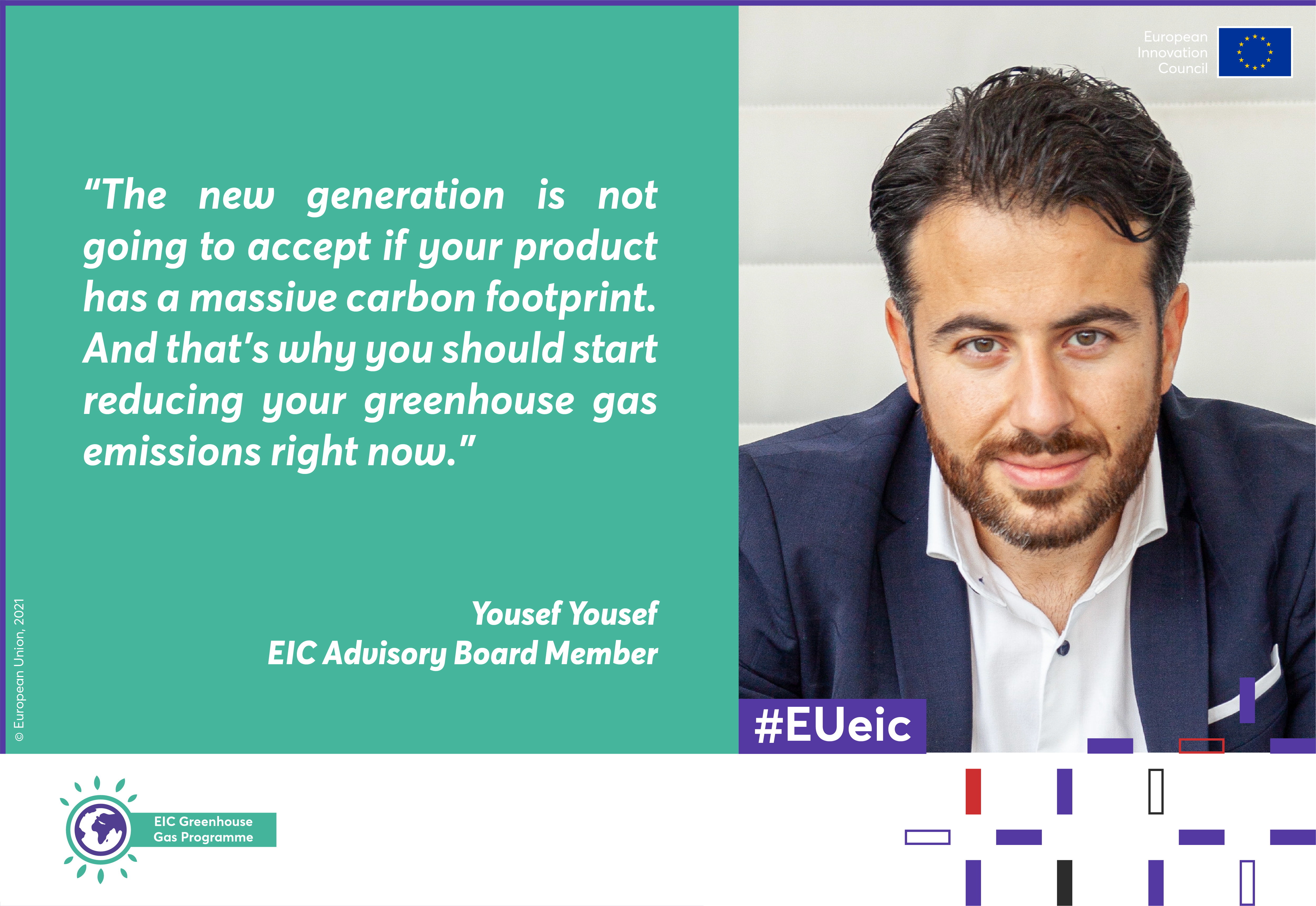 Can you tell me why it's important for our EIC innovators to reduce their carbon footprint and work on these new green solutions and products? What are they concretely going to gain from the programme?

Imagine that during the era of electric engines, you would come up with a steam imagine. You are literally missing the boat then. You are trying to sell something which is no longer future proof. The next generation is not going to accept if your product has a massive carbon footprint. And that’s why you should start now. It’s an opportunity, a very big one, and it will set the standard for doing business. Customers will ask for it, governments are asking for it, the industry is asking for it. You just need to hang in there and adapt your product.

Another important aspect of the Business Acceleration Services is the connection with investors. Do you think the EIC GHG can also be a selling point when pitching to investors?

Yes, perhaps not for all of them, but plenty will be interested. We need to be careful not to do it for greenwashing though. You really need to believe in what you're doing because people will look through that. So, once you develop your product, once you are co-creating with other companies, look at what is the best available technologies we can adapt, or tools we can adapt to reduce our greenhouse gas emissions, because if it's an authentic story you're selling and you do it passionately, there are a lot of investors and wealthy families who would like to invest. Many people out there are looking to change the world, all it takes is a right investment at the right time.

For me there are two scenarios. One scenario is it will be so successful, we don't need it anymore. In this scenario, people are already so much into the reduction and they understand how it is done, how to measure it. Take for example electric devices. You don’t need to promote those, it’s common sense.

The other, more realistic, scenario is that more and more corporates will see the benefit of the programme. We already saw Suez’s interest in the programme today, and more corporates are to follow these upcoming months. When corporates join and interact with the SMEs, it will be even more interesting to join. Because finally, as an entrepreneur, you are fighting for money and time. So, we need to be careful where to put both of them and the single most important thing for the entrepreneurs is to get contacts.

I really believe that carbon neutral products and innovations will become the standard. Take, for instance, electric cars. Before it was a niche product, but then it became a standard due to Elon Musk. Now we see all brands developing electric cars like crazy, just to not miss out. And that’s what’s going to happen with greenhouse gas emissions. If your company is not busy with reduction, you will be out of business within 10 years.

More on the EIC GHG Programme?

Those wishing to (re)watch the session, can do so here. For more information on the EIC GHG Programme, go to the EIC Community. The upcoming weeks we will launch several EIC GHG-related events in the EIC Community. Keep your eye on the calendar, our social media channels and EIC newsletter.