EIC Greenhouse Gas Webinar Wrap up: ‘Science Based Targeting’ for a better future!

On 28 October 2021, the European Innovation Council (EIC) and its Greenhouse Gas (GHG) initiative offered the fifth webinar. This session was focused on Science Based Targets meant to define and promote best practices when it comes to reducing emissions and align net-zero targets with climate science needs. Given climate change is a threat to humanity, nature, and the economy, the online participants had the chance to hear and participate on how we can use the Science Based Targets initiative to cut GHG emissions and avoid severe impacts of global warming on our society.

In the pursuit of a more sustainable world, the SBT initiative exists to mobilise companies to set emission reduction targets that go in line with the needs of climate science. With this mindset, the beginning of the webinar session reinforced the importance of generating the highest possible impact in terms of reducing GHG emissions by mentioning the set of webinars that already took place and co-creation events that aim to help create new solutions to reduce carbon emissions. Moreover, the EIC GHG Tool was also brought up given it's an instrument to access and keep track of your company's carbon emissions and where they stand - as a way of also mitigating them and monitoring your climate journey. 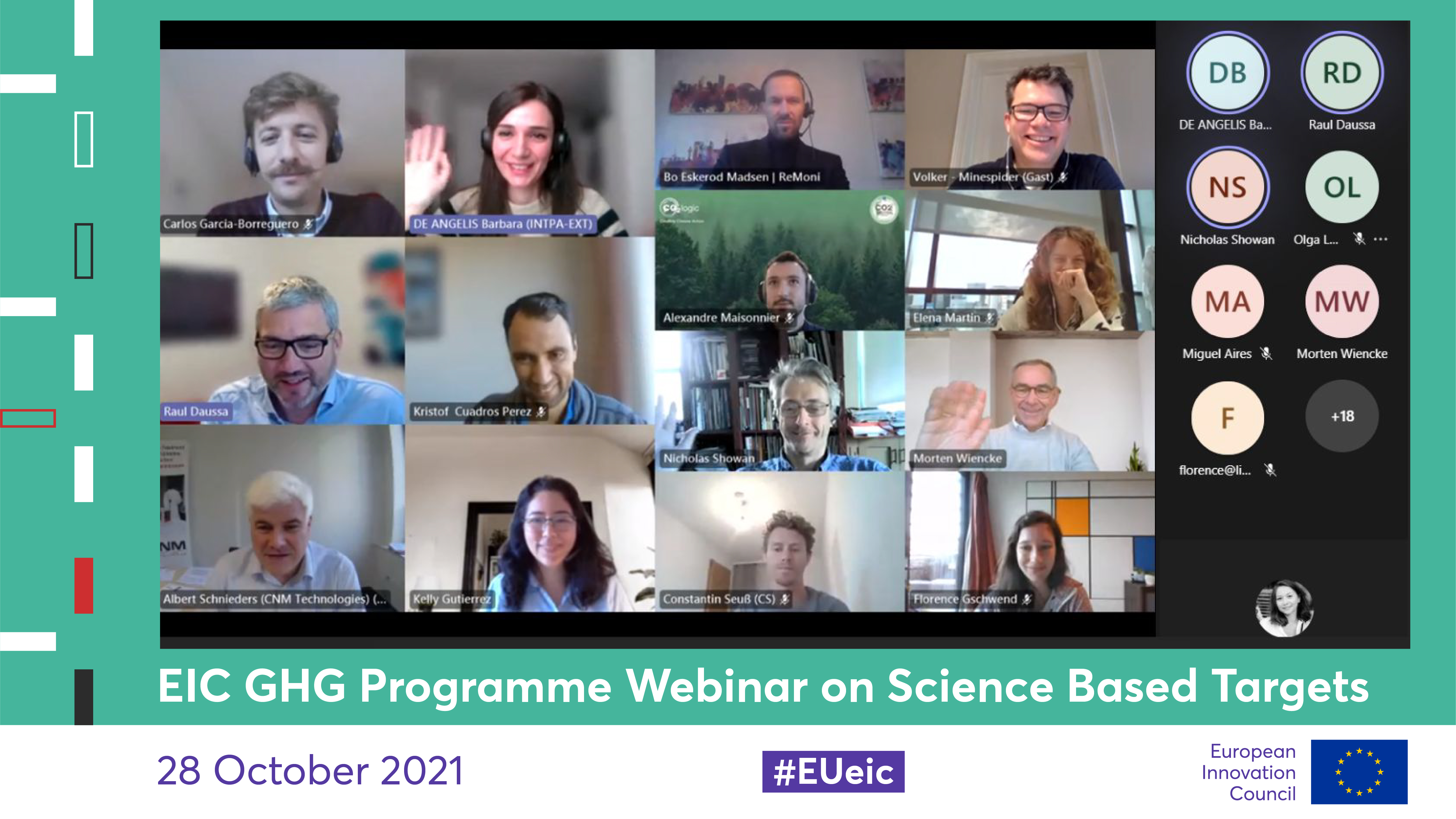 The Science Based Targets webinar followed suit by reiterating its purpose to help beneficiaries understand what it is about and why it’s interesting. By touching base on the Paris Agreement and EU Green Deal, the point was to reiterate the EU’s ambitions and actions to fight global warming and become climate neutral. The goal was to make sure the message was clear, so the importance of limiting warming to the 1.5°C was mentioned.

It’s well-known that, directly or indirectly, businesses are responsible for the majority of the GHG emissions, hence why the SBT initiative is a crucial one. The reasons to join it are simple:

This dedicated webinar touched upon matters concerning the EU’s target ambitions when it comes to reducing emissions, what the SBT initiative means for individual companies, and its methodology – among other key things.

For a better understanding of these topics related to Science Based Targets webinar, please click on the following link for the recording of the event:

If you’re as interested as we are in more key initiatives for success when it comes to saving the planet, make sure to check the upcoming EIC GHG webinars that cover several matters of importance (Carbon Neutrality and Electric & Hybrid Vehicles) to support beneficiaries becoming carbon neutral. As an EIC-funded SME, you can join the initiatives of the EIC GHG programme, be it the co-creation activities, the resource library or by using the EIC GHG Tool as well. Keep a close eye on our events calendar and the EIC Community Platform for what’s coming soon.