Stories: The future of basic research for technology development

Since March 2019, the Future and Emerging Technologies (FET) programme is part of the enhanced European Innovation Council (EIC) pilot. In view of the next Horizon Europe programme, it is crucial to understand the strengths and shortcomings of FET, and how this programme can evolve when taking inspiration from the US-based Defense Advanced Research Projects Agency (DARPA). 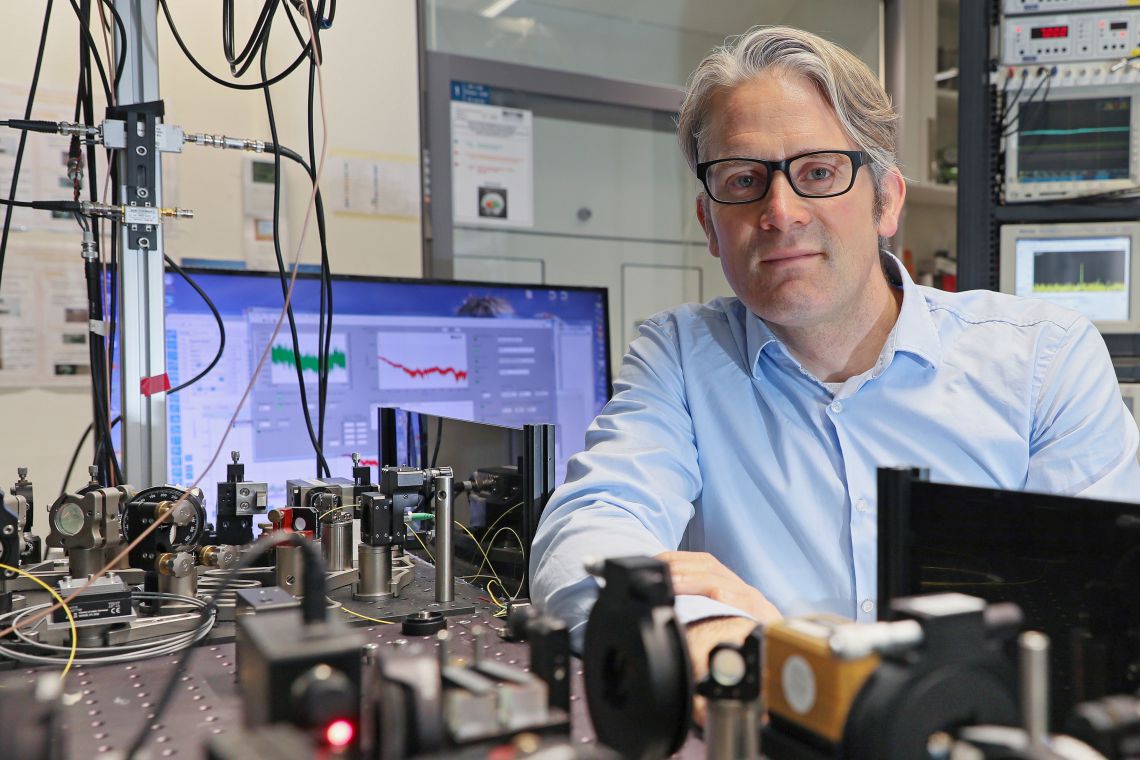 "Overall FET is a tremendously precious instrument of the EU, that has the highest potential to lead to new scientific and technological breakthroughs, by having a bottom up character. While the program can improve, one should be careful to keep this very instrument intact".

Tobias J. Kippenberg, Professor of Physics at the Swiss Federal Institute of Technology is the coordinator of the FET Proactive project HOT (Hybrid Optomechanical Technologies). During a seminar in September 2019, Kippenberg gave us his personal view on a number of issues related to the future of the FET programme and its relation to DARPA.

Tobias, what is the strength of the FET programme and how is it different to DARPA, from whom you have equally received support over the past decade?

The bottom-up approach of FET, which allows researchers to propose and pursue radically new ideas within a small consortium, has been an extremely important driver for innovation. It shares similarities but also exhibits differences to the US model, the famous ‘DARPA’.

DARPA is widely accredited for having laid the foundations for many technologies that will have an impact on our modern ICT society, be it with the internet, microelectromechanical system (MEMS) sensors that are used in mobile phones, or one of the first autonomous ‘self-driving’ cars. In a similar vein, FET has also laid the foundations for entirely new research fields, like cavity optomechanics, which can be seen in the MINOS (Micro- and Nano-Optomechanical Systems for ICT and QIPC) project. MINOS emerged bottom-up, and did so by funding a bottom-up group of researchers based in Europe, at a time where the topic was not targeted by any funding agencies. This testifies as one example of the strength of the FET programme. It has an unprecedented capacity to quickly allocate funding to new ideas, create new scientific communities and catalyse new areas of science.

Can the FET programme be improved?

As far as the programme is concerned, some shortcomings are inherent of being a victim of its own success. The success rates were notoriously low in the FET Open scheme coming out at 2%, discouraging most groups to apply for this call to action. Many great ideas were probably not actually funded, as they were never submitted. The recent success rate increase to 10% is still a bit low but acceptable, given the ambition and comparatively moderate effort for a proposal submission.

FET has a ‘Markovian’ nature: it is built purely on a future promise, rather than past success and mostly at individual level. The scientist track record should play a large role, otherwise it may result in empty promises. Another aspect lacking in the programme is how to continue a successful FET project from the past, to give it a lasting impact and create a scientific community. This could prevent building a long-term, successful research field.

The notion that FET has to constantly challenge radically the way of conventional technology or science, neglects historical developments that show many new gradually emerging technologies. The example of MEMS, as mentioned above, took more than 20 years of funding to transition to the market and actually become disruptive. Other technologies were faster – such as magnetic read heads – but still required additional investments from both academic and industrial stakeholders. In short, the FET projects that are successful need to transition to some sort of new framework in order to continue their success.

FET's great ambition is not, in my view, matched with a proper equivalent funding and duration framework. The programme typically funds very few co-workers per group for each partner, and mostly for a period of 3-4 years. In addition, the funding is quite limited, and can hardly cover the expensive technology demonstrators that require substantial nanofabrication and cleanroom processing costs, for instance.

How does DARPA work?

Primarily, DARPA teams, which have a similar objective of providing disruptive new technology (but are not bottom-up, like FET), proceed typically in 3 phases that last up to 5 years. This is longer than the typical 3-4 year programme. Moreover, the amount of funding tends to be higher than with FET.

Funding per team of 8 groups can reach 10 million USD, therefore allowing more expensive research questions and demonstrators to be developed. With this funding comes responsibility, however, and for projects that fail to meet intermediate milestones, programmes can terminate after 1 or 2 phases, and a programme manager with scientific experts verify that the ambition is matched.

DARPA programmes also have another advantage, of which I know as a performer in various programmes in the past decade. Once successful, new programmes are launched in response, or build on the work achieved. It is often the case that a successful DARPA programme leads to several new programmes that build on the first, creating continuity and driving innovation further afield. In one of my own research fields, on the subject of chipscale frequency combs (microcombs), I have witnessed the enormous impact that such an approach can offer. Frequency combs, for which Theodor Haensch won the 2005 Physics Nobel prize, have been first shown to be generated on a chip in 2007. Since then, chipscale frequency combs have allowed tremendous scientific progress and discoveries in nonlinear dynamics, and even more importantly, have been matured from proof of concept, to a level where they have been used for atomic clocks, high-speed massively parallel optical telecommunication, frequency synthesisers to ultrafast Light Detection and Ranging (LiDaR), within just one decade. They are now at the fingertips of transitioning to real-world applications. Such successes have been made possible by several DARPA programmes targeting new areas of exploration.

In the cases where DARPA cannot fund any further, as moves to new areas, the topics are typically moved to other agencies, and multi-university research initiatives (MURI) continue to fund (often via other agencies such as ONR, AFOSR, etc.), long-term, typically over 5 years, the emerged research community. This consolidates and even at times expands the research community, and allows the fields to mature, deepening their impact on society. Such MURI initiatives presently lack in Europe, with Marie Curie training networks being perhaps the closest funding instrument, but significantly shorter in duration (3 years versus 5) and without being thematically targeted.

What are your concrete recommendations for the future?

First and foremost, the bottom-up character should be kept, because it ensures that new ideas are actually being funded. Dogmatic research risks are missing the true new revolutions. FET should not dictate what type of research, nor what problem is solved. Focussing research to address only energy, computing or diseases could risk that unforeseen advances are entirely missed.

Secondly, the new framework programme could adopt a similar strategy and launch a call for new FET or MURI-style programmes, based on past successful FET projects. This would consolidate research communities and provide continued exchange and collaboration among multiple FET projects in the same or a similar domain.

Thirdly, another recommendation concerns funding and size of the consortium. FET Proactive disregards too much of the efficiency of small teams, while FET Open is underfunded for their ambition and ultimately too short. Large teams with 17 or more partners become too large to manage – this is not the role of scientists. Rather, FET Proactive should encourage small teams, with more funding and a longer duration, and fund multiple teams to work on similar topics: spurring not only competition, but rather to create and foster academic exchanges by regular review meetings that could serve as conferences, where unpublished work is slow, but work in progress.  In addition, the funding should be larger and truly match ambition; a doubling of FET would appear well justified in light of our US counterpart. In short, FET projects would need more funding and longer durations, with a smaller team size than those currently involved.

Fourthly, one specific aspect to make the FET research more effective and help research communities emerge, is to ensure that within Europe all actors are funded. For instance, for each team that is granted on the programme, a proactive call could fund one or more new teams that address the same challenge. In addition, FET in the same area could hold joint meetings.

Penultimately, FET does well in introducing programme managers. In the US, these managers cover all ages, from recent PhD graduates to professors that are retiring from their university positions. In the US, programme managers are active, and not only promote their programmes at conferences, but equally consult with the scientific community. Short whitepapers provide a way to ask the scientific community for proposals for a given challenge, or new ideas, before a proactive call is launched. Programme managers and bottom-up characters are however not mutually exclusive, even if properly introduced.

Finally, the way programmes are reviewed could need to be changed. Instead of lengthy reports, they should organise annual expert meetings that unite the multiple consortia, which work on a given FET challenge. This would enhance the scientific interaction among different FET teams who work on the same challenges, and would be a better quality control than written progress reports.

Overall, FET is a tremendously precious instrument of the EU that has the highest potential to lead to new scientific and technological breakthroughs, by having a bottom-up approach. While the programme has room for improvement, we should be careful in keeping this instrument intact. Directed research, which targets specific challenges – as many examples in history have shown such as Giant Magneto Resistance – will not always bring us the innovations that have shaped our lives.